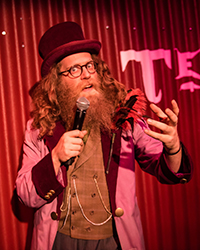 Created by Hannah Moscovitch, Christian Barry & Ben Caplan This Klezmer-folk music-theatre hybrid starring Hamilton’s own genre-bending sensation Ben Caplan is inspired by the true stories of two Jewish Romanian refugees coming to Canada in 1908. Old Stock: A Refugee Love Story is a humourously dark folktale woven together with a high-energy concert about how to love after being broken by the horrors of war.

It's about refugees who get out before it's too late, and those who get out after it's too late. And it's about looking into the eyes of God.  Old Stock has toured to 29 cities around the globe, receiving many awards and accolades along the way including a Herald Angel Award, Edinburgh Fringe First, seven Theatre Nova Scotia Merritt Awards, six Drama Desk nominations, including Outstanding Musical, and a New York Times Critics pick.