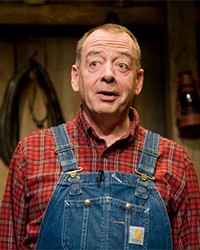 In the second season of the farm Walt faces another challenge as the spectre of urban development looms over the Seventh Concession. Walt sounds the alarm, but can he mobilize the neighbourhood to save Larkspur's rustic splendour? Wingfield's Progress, brings Walt and all of your favourite Larkspur residents back at their hilarious best in this sequel to Dan Needles' Letter From Wingfield Farm.

All ticket sales are final.